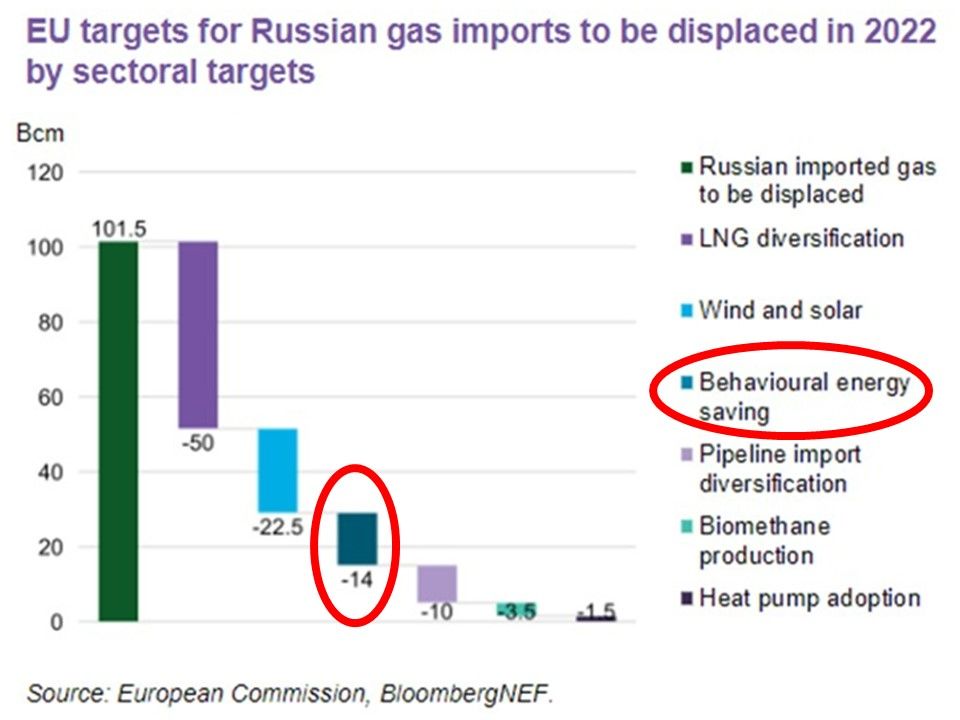 Energy efficiency, the cleanest, lowest cost, most overlooked resource in the climate fight, is now part of the world’s pushback against Russia’s invasion of Ukraine, according to the International Energy Agency.

Energy efficiency, or EE, is fundamental to the clean energy transition, analysts have long agreed. But the Ukraine war-driven urgency for the European Union to end reliance on Russian natural gas and arbitrary Russian threats like the July 11 shutdown of the Nord Stream 1 natural gas pipeline to Germany, and avoid stopgap coal burning now makes EE vital, a June 10 statement co-signed by the U.S. and 25 IEA parties in the Americas, Africa, Asia and the EU recognized.

EE is “critical” to keeping world energy “affordable, secure, and clean,” IEA Executive Director Fatih Birol told the annual IEA Global Conference on Energy Efficiency June 8. And world leaders must make the conference “a meeting of hope” where “the world hits the accelerator on efficiency” or they may “pay the price for years to come.”

This “could be the peace project of our time,” U.S. Principal Deputy Assistant Secretary for Energy Efficiency and Renewable Energy Kelly Speakes-Backman added at the conference. “Russia’s unlawful invasion of Ukraine has challenged us to think differently about how we generate, distribute, and use energy, and the case for energy efficiency has never been more urgent.”

In the U.S., EE has enormous potential but must demonstrate its value across different regulatory and market circumstances, Speakes-Backman and other U.S. EE advocates said during and after the IEA conference. With more innovative and comprehensive policies, EE can have great value as demand response, or DR, and be used when and where the power system needs kWh reductions the most, they said.

Halving EU energy intensity, a ratio of energy use to gross domestic product, could reduce the need for “650 billion cubic meters of natural gas per year,” about four times the EU’s 2021 Russian imports, according to the IEA report released during the conference. “Total energy savings” could lower EU electricity bills “at least $650 billion a year by 2030,” the report added.

The Ukraine invasion “has massively disrupted European and global energy markets,” said the May summary of REPowerEU, the European Commission, or EC, plan to end Russian fossil fuel dependence. It called for raising the EU-wide target on total energy savings through efficiency efforts for 2030 from 9% to 13%.

“The current scale of energy efficiency action is not sufficient” and implementation must be accelerated “on a global level,” the IEA post-conference 26 party statement agreed. EE “offers immediate opportunities to reduce energy costs and reduce reliance on imported fuels,” it stressed.

The EC proposal to accelerate EE “would be a step forward,” but “still must be approved by the European Parliament’s 27 member states,” Regulatory Assistance Project Executive Director for the EU Jan Rosenow told Utility Dive.

Final approval could come in the fall, and “hopefully before the next winter heating season because there could be real shortages and price spikes,” Rosenow warned. “But at least EU countries are finally considering policies that recognize it is necessary to move entirely away from natural gas as soon as possible.”

Recent executive orders from President Biden on heat pump production and liquified natural gas exporting show it supports the new EU initiative and may see market opportunities in it, Rosenow and others said.

It is not clear if or whether the IEA initiative will directly impact the U.S. because “we march to our own drum,” American Council for an Energy Efficient Economy Executive Director Steve Nadel told Utility Dive. Only a few of some 50 federal efficiency standards that need revision have advanced, though new state and local performance standards for buildings and vehicles are making a difference, he said.

The most important policies are those that can make EE cost effective, like rebates and financing mechanisms that reduce upfront deployment costs, Nadel said. Some utilities, green banks and institutional lenders support on-bill financing and property-assessed clean energy, or PACE, programs that allow customers to pay for EE installations with their bill savings, he said.

Those policies, along with time-of-use, or TOU, rates that shift usage, and performance standards and codes for buildings and appliances have helped make California, followed by Massachusetts, the top two EE states, according to ACEEE’s December 2020 state analysis. For recent light bulb efficiency standards and residential and commercial building codes, Nevada was ACEEE’s “most improved” state.

Energy efficiency resource standards, which commit utilities to binding EE targets, are in place in 27 states, the ACEEE state analysis reported. “Wherever there is a standard, utilities have ramped up to meet them,” Nadel said.

In an ACEEE February 2020 utility analysis, Massachusetts’ Eversource and National Grid tied for first place for energy savings of over 3% in 2018, ACEEE said. San Diego Gas and Electric, or SDG&E, Illinois’s Commonwealth Edison, or ComEd, and Baltimore Gas & Electric followed in the top five.

Most utilities have ratepayer-funded EE programs, but adoption “tends to ebb and flow” with the economy, and “more can and should be done,” SDG&E spokesperson Sara Prince emailed. EE incentives are “the right thing to do,” agreed ComEd spokesperson Thomas Dominguez.

EE and DR offerings, with TOU rates that support demand shifts, can reduce peak usage an estimated 5%, according to Opower. Its California EE programs were “nearly 72% of all peak savings claims from IOU EE programs” in 2021, according to California regulatory data.

A new way to use EE

U.S. consumers spend over $400 billion annually on energy for residential and commercial buildings and over 30% “is wasted,” according to a June 2022 Lawrence Berkeley National Laboratory, or LBNL, report. But “understanding efficiency market drivers and possible future efficiency market attributes” can allow policymakers and other stakeholders to change that, the report said.

There is an emerging realization that “reducing a kWh during peak demand is way more valuable to the climate and public health than reducing a kWh of overnight usage,” Rhodium Group Senior Analyst Ben King, previously a DOE analyst and representative for EE to the IEA, told Utility Dive.

New policies can provide incentives for EE to function as DR and make new and retrofitted grid interactive efficient buildings a significant system resource, King said. But designing those policies remains “a solution to target,” he acknowledged.

New research at LBNL may accelerate that policy design, according to LBNL Electricity Markets and Policy Department Program Manager Natalie Mims Frick. EE can be DR “if it changes a building’s electricity use when it matters to the system,” and new LBNL work on building load shapes is quantifying that potential, she said.

Policy incentives could then be designed for the EE tools that optimize peak load reductions, and as system needs evolve, those incentives can be re-targeted, Mims Frick said.

Policies that optimize EE as DR can “provide savings for the entire system” and make the energy transition “more affordable,” agreed Commissioner Megan Gilman of the Colorado Public Utilities Commission during a June 30 LBNL webinar on the future of energy-efficient buildings.

EE “is where the conversation begins” for making new build and building retrofits sustainable, and “the policies most agile at using EE to meet market needs are becoming the most attractive,” said Trevor Joelson, Business Development Manager for Commercial Energy Services for heating and cooling systems provider Trane Technologies.

The big payoff from EE will come from integrative design of things that use energy as whole systems for multiple benefits, according to extensive data analysis by Amory Lovins, co-founder and Chair Emeritus of Rocky Mountain Institute and Stanford University Adjunct Professor of Civil and Environmental Engineering.

An emerging energy-as-a-service, or EaaS, concept could move the private sector toward a more integrated use of EE and renewables, some EE advocates said. EaaS is similar to “traditional” companies that contract to provide energy savings, but the EaaS provider makes all project capital investments and owns and manages the project, according to a 2019 Deloitte white paper.

The EaaS provider has an incentive to integrate all EE options into the project’s design because it carries all project risk and derives greater profit from optimizing project performance, Deloitte said. The customer, typically the building owner, shares in the savings according to the terms of five-year to 20-year contracts and benefits from the “simplification” of energy management, it added.

The global potential revenue of EaaS could reach $278 billion per year in 2028, according to a Navigant Rearch 2019 (pre-pandemic) estimate. And established energy service contractors, like Honeywell and Trane, have “a powerful advantage,” Deloitte said.

EaaS could “enable a significant amount” of EE adoption, Trane’s Joelson agreed. Some large Trane commercial customers “see no reason to give up the savings opportunity to a third party,” though others, like large data centers, which are aggressively growing, may “want to focus on their core business,” and therefore welcome EaaS if its benefits outweigh its costs, he added.

Mechanisms like limited energy savings performance contracts with companies like Honeywell and Trane work for large commercial customers, but EaaS might enable EE for residential customers, Rhodium’s King said. It might be implemented as a subscription fee but that kind of use of the concept “pushes beyond where providers have gone so far,” he recognized.

Though utilities have still not generally adopted EaaS, they “have a natural advantage” because of “long experience of owning and operating the essential physical assets,” Deloitte said. And it could be an innovative way “to improve their connection” to consumers, the paper said.

It offers “an interesting new customer relationship” and is “something we might explore if it delivered a better customer experience,” Eversource’s Findlay said. But it would require the utility to develop “a different line of business,” she added.

Whatever business models might emerge, the acknowledgment of EE’s importance was welcomed by advocates.

“It is easy to think about 2030 or 2050,” but “policy decisions now about energy efficiency in the next three years will impact the climate and the Ukraine war,” Ireland Environment, Climate, Communications, and Transport Minister Eamon Ryan warned world leaders at the IEA conference.

“There is no distinguishing between the EU effort to get off Russian fossil fuels and what we do in the U.S.,” Lovins agreed. “The high EU energy prices rippling through markets all over the world are sending a global price signal to incentivize efficiency.”

CORRECTION: A previous version of this article misidentified what some of the proposed initiatives would do. EU’s energy intensity would be halved, and payoffs would come from integrative designs.